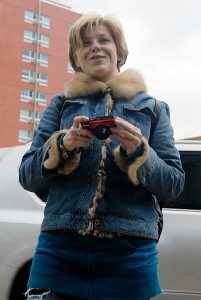 I was born in Milan, 意大利, in June 1971. Since my childwood I began to move along Italy because of my father’s job. The first time I came to New York was for a travel award when I was 17, 但我只看到了曼哈頓和其他一點. Almost a year later I came again and I was fascinated and enchanted by this City.

Since now I’ve travelled a lot around the world but I just can not stay away from New York City for a long time, because I really feel a newyorker inside. That’s the only place I could call Home, the only City where I can enjoy and completely relax myself. It seem even my little baby girl loves to come there, so I’m so so happy! She has some mum’s DNA!

This project is in memory of my lovable father and a special woman and poetress as Delfina Provenzali, who had always believed in me.